Ask Me a Question
A message from Zeidy Garcia:

If you are looking to Purchase, Refinance, or Invest...Mortgage rates are Still Low!

﻿Feel free to give me a call or visit my website and I'll give you a quote.

Several developments are converging on the global economy and financial markets at the moment. Each brings its own causes for concern. Together, they bring a significant increase in volatility.

Should we be worried about Omicron?

Answering such questions is beyond the scope of this newsletter.  What we can say is that the financial market is clearly asking itself this question and the effects are obvious.  Stocks had been flat in the weeks leading up to omicron and bonds had been moving higher in yield.  Post-omicron and they've entered into a familiar risk-aversion pattern marked by lower stock prices and bond yields. 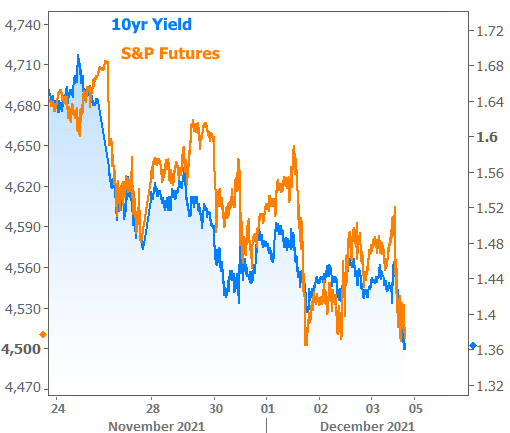 The same "risk-off" vibes are apparent in other assets as well.  Covid may not be the only consideration for oil prices, but it did give them a push.  Lower oil prices don't dictate rates, but they have a bearing on inflation.  Lower inflation is good for rates, all other things being equal.  So at the very least, lower oil prices aren't hurting rates. 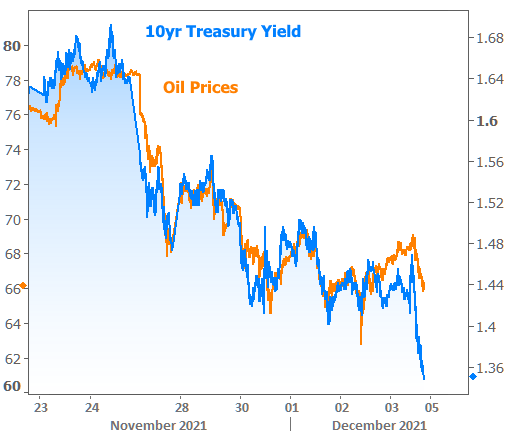 Should we be worried about inflation?

The Federal Reserve is increasingly saying "yes!"  Just this week, Fed Chair Powell dropped several candid comments during a scheduled congressional testimony.  These weren't out of left field, by any means, but they surprised more than a few market participants.

What did he say?

In a nutshell, Powell acknowledged that we should no longer be referring to high inflation strictly as a temporary by-product of covid-related supply disruptions.  That's important because it suggests the Fed needs to be more aggressive when it comes to doing something about it.

The second comment followed naturally from the first when Powell said the Fed may need to taper more quickly (fancy words for buying fewer Treasuries and MBS).  By the end of the week, multiple Fed speakers made similar comments.  Suddenly, the market is gearing up for the strong possibility that the Fed announces an acceleration of its tapering process as early as the December 15th meeting.

Should we be worried about the Fed tapering faster?

Yes and no.  The goal with faster tapering isn't actually about tapering.  Rather, the Fed's playbook calls for finishing asset purchases before raising rates, and raising rates is what the Fed would really like to be able to do in the fight against inflation.  In other words, faster tapering is a means to an end.

The Fed's rate hike outlook affects shorter duration bonds first and foremost.  After all, a 2yr Treasury note is a lot closer to being an "overnight" rate (like the Fed Funds Rate) than a 10yr Treasury note. 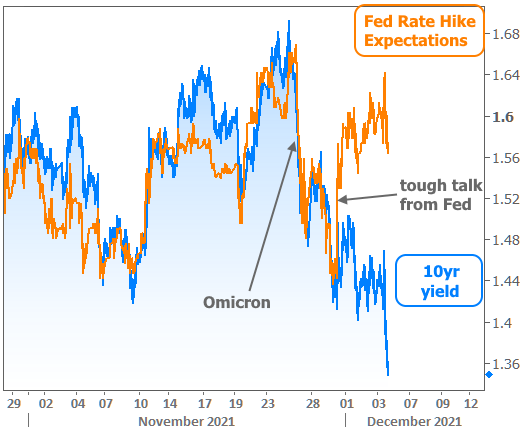 The only catch is that mortgage rates haven't weathered this storm as well as 10yr Treasury yields.

Should we be worried about mortgage rates?

Not really, but at the same time, they've gotten the shorter end of the stick relative to 10yr yields.  There are a few reasons for this.  The simplest reason is that the average mortgage doesn't tend to last 10 years.

That means from an investment standpoint, mortgage-backed bonds are often more comparable to shorter-term debt like 5 or 7 year Treasury notes.  In fact, one popular analytical practice is to use a blend of 5 and 10yr Treasury notes to serve as a better basis of comparison for mortgage bonds.

If we compare mortgage rates to 10yr yields, we might be more concerned about the recent underperformance. 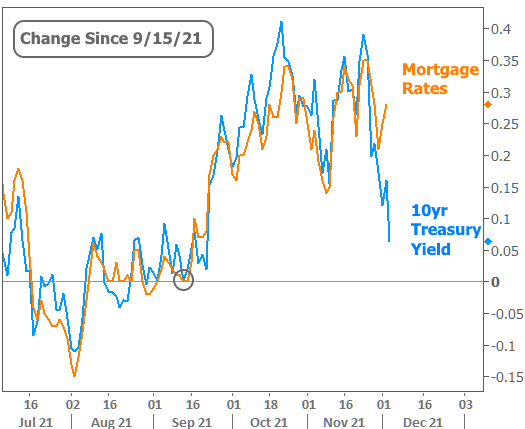 But if we make the same comparison with 5yr yields, mortgage rates have actually done better over the past few months.  (NOTE: we chose mid September as a baseline because Fed taper talk shifted into higher gear in late September, thus sparking the biggest recent shift in performance between longer and shorter term rates). 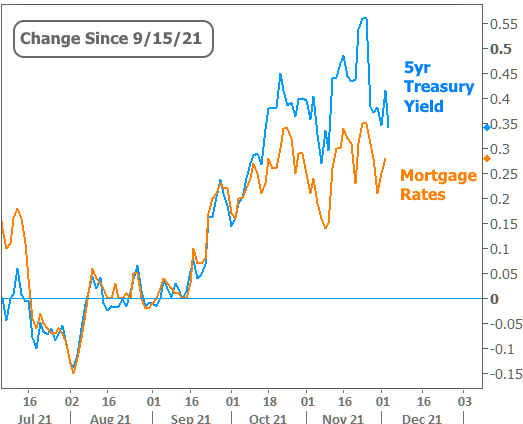 Where do we go from here?

That's the topic of much debate and unavoidable uncertainty.  As has been the case since early 2020, so much depends on the course of the pandemic.  Omicron simply increased uncertainty and widened the gap between positive and negative outcomes.

If things go well from a global health standpoint and omicron fails to become as damaging as this summer's delta wave, rates would likely move higher.  In the opposite scenario, the downward pressure on rates would take its cues from the severity of the situation.  More lockdowns and global economic upheaval = lower rates, generally speaking.  We'll cross those bridges if we come to them (and we'll hope not to)

Other important developments this week.

A message from Zeidy Garcia:

If you are looking to Purchase, Refinance, or Invest...Mortgage rates are Still Low!

﻿Feel free to give me a call or visit my website and I'll give you a quote.