Inflation is bad for interest rates and it's at the highest levels in decades. But the housing market has a far bigger problem.

Actually, it's not hard for a problem to become bigger than rates right now considering we're still at levels that would have been record lows at any other time before covid.  Moreover, rising rates (within reason) might help to tap the breaks on what has been an unprecedented disparity between supply and demand.

That brings us to the big problem: supply--or rather, the lack thereof.  Lamenting the lack of housing inventory is a common refrain, but it's never been more relevant.  The ill effects are increasingly visible as various home sales metrics have failed to advance for several months now.  This week's update on New Home Sales provided the most recent example, falling moderately and undershooting expectations. 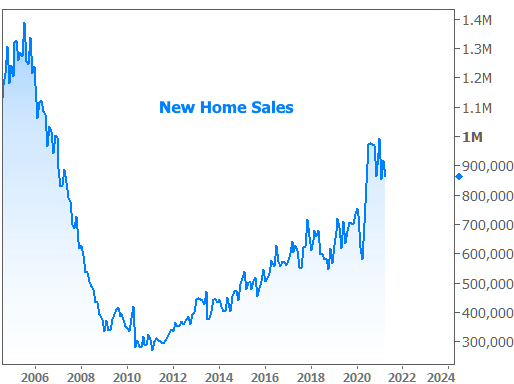 This doesn't mean people don't want to buy new homes.  Rather, this range of 850k to 950k is simply about as fast as the housing industry can get the things off the shelf in the current environment.  The issue is more acutely visible when existing homes are added to the mix, as seen in this week's monthly update on Pending Home Sales. 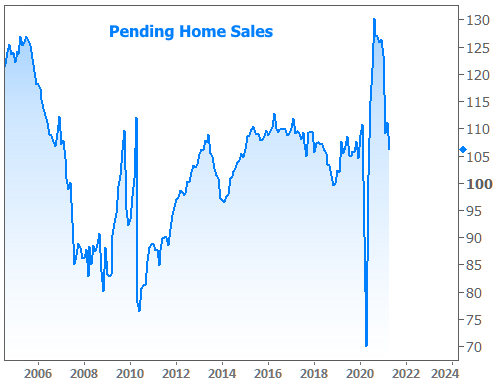 Your eyes do not deceive you.  We are indeed back to pre-covid levels for pending sales.  While some of the pull-back could be driven by a decrease in demand, record low inventories are almost exclusively responsible.

One of the best places to witness the effects of the inventory crunch is in home price reports. March's price numbers came out at the beginning of the week, and they leave nothing to the imagination:

Is a 14% annual appreciation rate sustainable?  Of course not.  In fact, it could be a self-correcting problem before too long.  Just this week, several members of the Federal Reserve's Open Market Committee mentioned they're paying more attention to home prices, or rather, that home prices will factor into an eventual discussion of adjusting the Fed's bond buying portfolio.

Why does that matter?  Fed bond buying is a major contributor to low rates.  The Fed currently buys $40bln / month in mortgage debt (in addition to reinvesting 10s of billions of proceeds from previous mortgage bond purchases).  The Fed knows that low rates grease the skids for home prices.  If they're worried about the implications of rampant appreciation, they might cut their mortgage bond purchases faster/more than their Treasury purchases.

That's a bridge they'll cross when they come to it though, and they haven't come to it yet.  In fact, the Fed is committed to keeping policies accommodative until the economy has logged several months of much stronger data.  They've also managed to convince markets not to be spooked by temporary inflation spikes.

It's not too much to ask the modern bond market to forgive the sorts of inflation spikes seen at times in the past decade.  But the inflation spike seen in April's data (the stuff reported in the past 2 weeks) is on another level.  We'd already discussed the impressive reaction to the CPI data 2 weeks ago.  Now this week, a similar report (Personal Consumption Expenditures or "PCE") gave markets another chance to save inflation panic for another day.

The Core PCE Price Index (long said to be the Fed's preferred big-picture inflation metric, and the thing they're hoping to see in the 2-2.5% range for a few months before gradually moving back down to 2%) rose to 3.1% from last month's 1.9% reading.

This is the highest level in decades.  At any other time in history, this sort of swing would have sent interest rates screaming higher at a record pace.  Instead, here's how bonds/rates traded on the day of the release:

In other words, there was effectively zero reaction to the inflation numbers.  Rates were more keen to move for end-of-month housekeeping reasons, and they moved lower to boot!

Bottom line: markets take the Fed at their word regarding inflation.  As such, it's a waiting game to see how things evolve in the coming months.  Without a decisive bias in the economic data, rates might have a tough time finding enough inspiration to make the sorts of moves seen in the first 3 months of the year.

This isn't to say economic data is incapable of influencing rates in the short term, just that it's a high bar to clear.  If any report is up to the challenge, it's next Friday's big jobs report.  Granted, it can't fundamentally alter rate momentum in a lasting way, but it can definitely cause some volatility.