It was a week for paradoxes on several fronts, most notably when mortgage rates moved lower just after the Fed floated the idea of an even bigger hike.

There's a popular misconception that the Fed sets mortgage rates, or controls them directly in some way.  They don't.

The Fed sets the Fed Funds Rate (FFR) which applies to loans between big banks for less than 24 hours.  Mortgage rates are control by bonds that last years.  FFR is a short-term rate and mortgages are longer-term.

The only major exception is seen when the Fed is changing its bond-buying plans.  Those bond purchases have a direct impact on mortgage rates because they include the bonds that underlie the mortgage market as well as other longer-term bonds that move in concert with mortgages.  All that having been said, we haven't had any big news on Fed bond buying in months.

The other reason mortgages don't care about the Fed Funds Rate is that the Fed only meets 8 times a year whereas mortgage rates change every day (sometimes more than once!).  That means mortgages as well we the rest of the bond market can move well in advance of the Fed actually pulling the trigger.

In fact, betting on future Fed rate hikes is big business.  Securities known as Fed Funds Futures trade for exactly this purpose.  They go a long way in explaining this week's paradoxical movement.  The chart below shows Fed rate hike expectations for the middle of next year as well as 10yr Treasury yields (which correlate very well with mortgage rates) 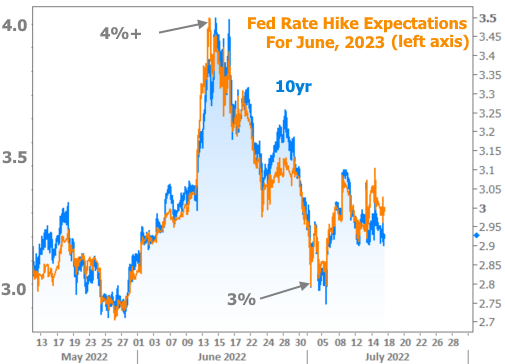 The next chart shows Fed rate hike expectations 3 months from now.  Notice this week's surge is much more pronounced: 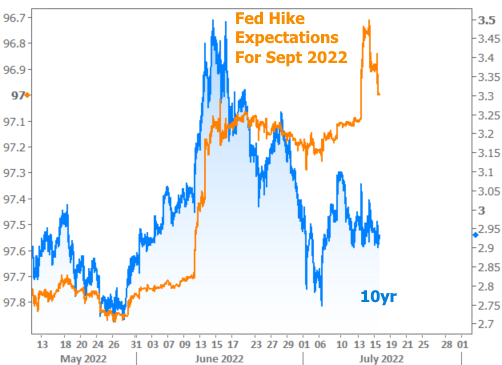 What does it all mean?

These charts tell us that something happened this week that greatly increased the odds of bigger rate hikes in the short term, but that traders didn't think those higher rates would be sustainable by the middle of next year.  A closer look reveals the culprit, but first let's name the culprit explicitly: CPI!

CPI, or the Consumer Price Index is a key inflation report.  It was responsible for the big surge in rates last month (which can be seen even more easily via the orange line in the chart above after June 9th).  This time around, it surprised to the upside yet again, coming in at the highest month-over-month levels since 2005 and the highest annual levels since the early 80s.  Here's how it impacted bonds.  The following chart uses 2yr Treasury yields instead of Fed Funds Futures). 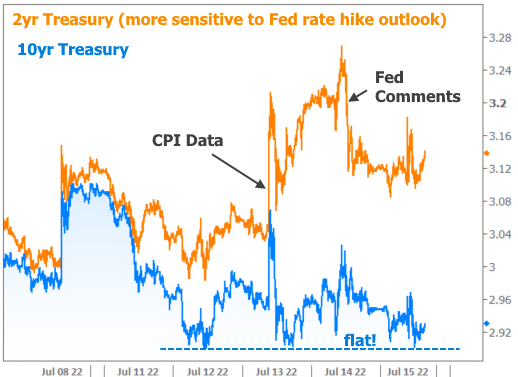 After CPI came out, the market quickly ramped up bets for a 1.00% Fed rate hike at the upcoming meeting. That would make it the biggest hike since 1984.  The following day, Fed member Christopher Waller said the market might be a bit ahead of itself and that, while a 1.00% hike was on the table, it wasn't necessarily the base case.  This helped 2 year yields and Fed rate hike expectations cool off.  Notably though, 10yr yields were already much cooler--basically trading flat on the week.

We've already established that longer-term rates (like 10yr yields) don't care as much about shorter term Fed rate hike expectations.  One key reason for that is that 10yr yields have to consider everything that might happen over 10 years.  And although inflation is high now and may remain higher in the short term, it's expected to fall one way or another in the coming months.  Some measures, such as CORE CPI (which ignores more volatile food and energy prices) has already been declining in year-over-year terms. 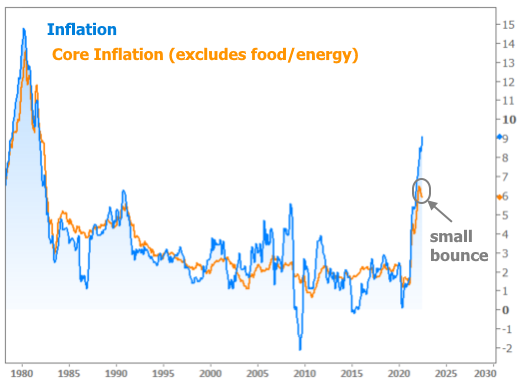 If inflation doesn't decline as expected, the market BELIEVES the Fed will hike rates even more aggressively.  The effect of such rate hikes and high inflation would almost certainly be a recession (something that almost always leads to falling prices).  If consumer sentiment is any indicator, a recession might already be in the cards. 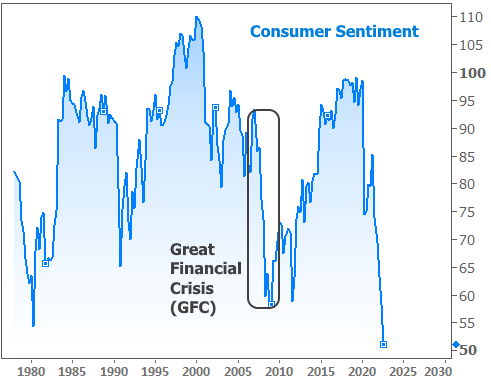 The same report that tallies consumer sentiment also asks about inflation expectations.  There was a notable shift this week. 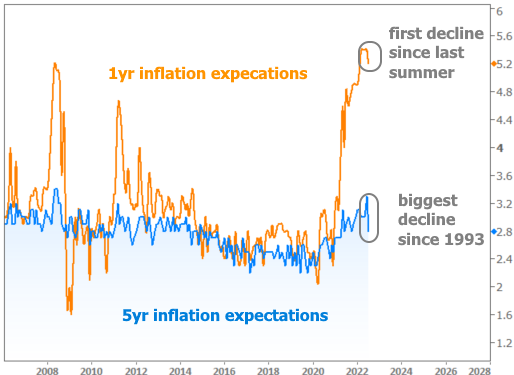 Even Friday's hotly anticipated Retail Sales report, which beat expectations by coming in at 1.0 vs 0.8% failed to remain in positive territory after accounting for inflation.  Here's the unadjusted retail sales chart: 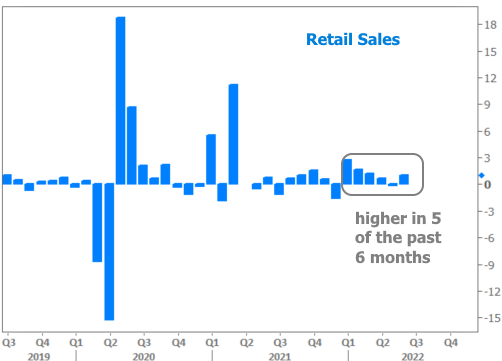 And here's how it looks when we subtract inflation: 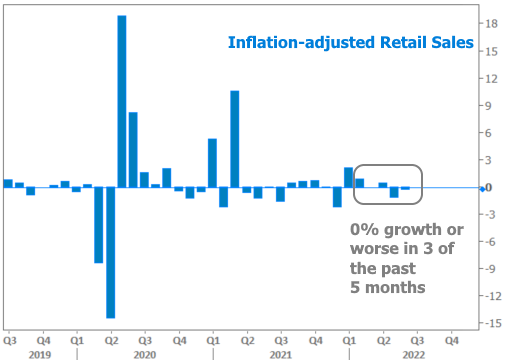 The bottom line is that although we have high inflation and high Fed rate expectations today, the market increasingly foresees a scenario where the combination of those factors squeezes consumers to the point that inflation falls significantly.  Because longer term rates like 10yr Treasuries and mortgages are more aligned with longer-term expectations, they've been the first to benefit as the narrative shifts.  Both are still elevated from a recent historical standpoint, but both are well off their mid-June highs and have generally been declining since then. 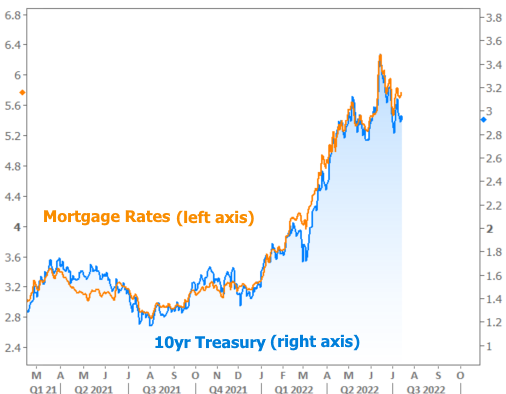 Next week brings several housing-related economic reports which will help us understand how 2022's rate spike (not to mention the decline in consumer sentiment and affordability) have impacted the housing market.  The following week brings the next Fed announcement and rate hike.  It remains to be seen whether it will be 0.75% or 1.00%.  Either way, longer-term rates will have a much better idea by then, and will already have moved accordingly.