It's certainly already been an interesting year for financial markets--especially for housing and interest rates. But most of what's happened over the past 8 months could be thought of as the more predictable phase of the post-pandemic market cycle. It's what happens next that'll be more interesting.

How could anyone say that the last 8 months have been predictable when rates have risen at the fastest pace in decades to the highest levels in more than 14 years?  It's true, the pace and the outright levels defied most predictions.  But the predictable phenomenon was more of a general truth that we knew we'd contend with in late 2021.  Here it is in a nutshell:

The Fed shifted gears on bond buying in late 2021, announcing a gradual wind-down of new bond purchases to be followed by a series of rate hikes.  This shift from the Fed was always likely to coincide with rising rates and lower stock prices.  The only uncertainty was the size, speed, and staying power of the shift as the Fed attempted to strike a balance between combatting inflation without crippling the economy.

June's reading of the Consumer Price Index (CPI, a key government inflation report) was the only major curve ball of the year--generally thought to be a byproduct of the Ukraine War's effect on commodities prices.  It made for a rapid reassessment of the Fed's rate hike outlook as seen in the chart below.

The blue line is the market's expectation of the Fed Funds Rate after the September meeting.  Note the big leap in June.  To be fair, July's inflation report caused another jump, but it fell back quickly to the previous 2.875% range and has been there ever since. 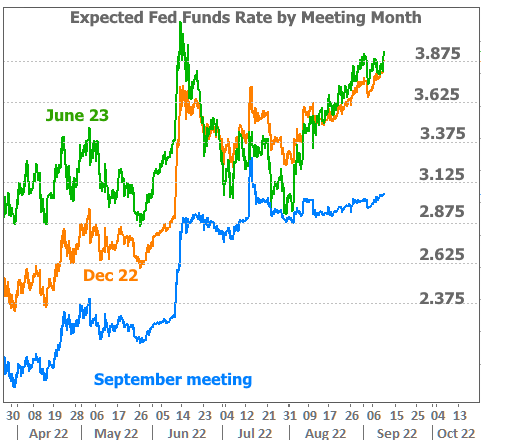 Longer term rate expectations (for the December meeting as well as next June's meeting) have had more ebbs and flows due to the shift in the economic outlook.  Weaker economy = lower long-term rates, all other things being equal.  These longer-term expectations share more similarities with longer-term rates like those for mortgages. 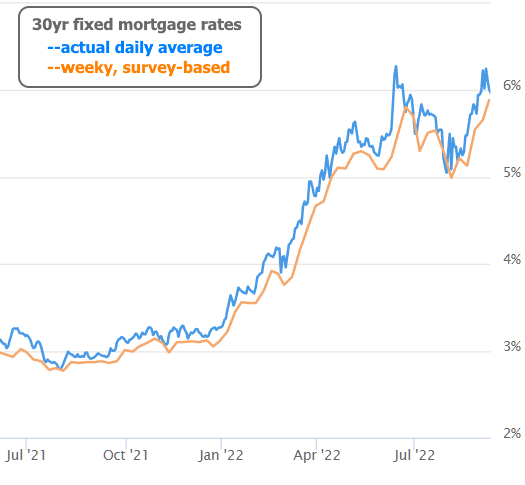 Rates recovered nicely in July as markets feared recession, but rebounded sharply in August as data suggested a much more resilient economy.  This was especially true of the jobs report in early August as well as the ISM Purchasing Managers Indices (PMIs) which are like more timely, more highly regarded versions of GDP broken out by manufacturing and non-manufacturing sectors.

PMI data has been responsible for several noticeable jumps toward higher rates over the past month.  The same was true this week when the non-manufacturing (or simply "services") version came out on Tuesday morning. The services PMI was expected to move DOWN to 55.1, but instead moved UP to 56.9, effectively keeping it in "strong" historical territory whereas the market thought it was trending back down to the "moderate" level. 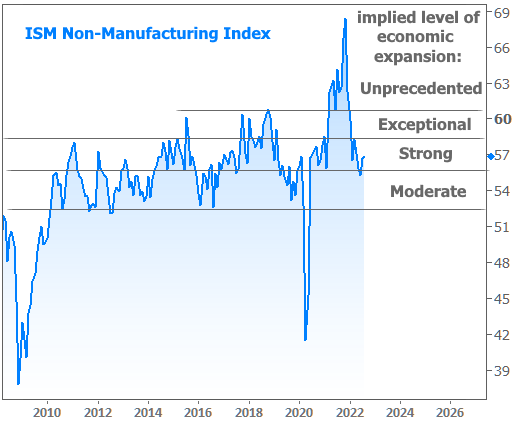 That's all just a fancy way of saying that, despite GDP numbers being in negative territory, and despite aggressive Fed rate hikes, other economic indicators suggest the economy continues to expand.  The PMI data helped push US rates higher at a faster pace than overseas rates as US traders returned from the 3-day weekend, but European rates took the lead on Thursday after the European Central Bank hiked rates and warned about upside risks to the inflation outlook. 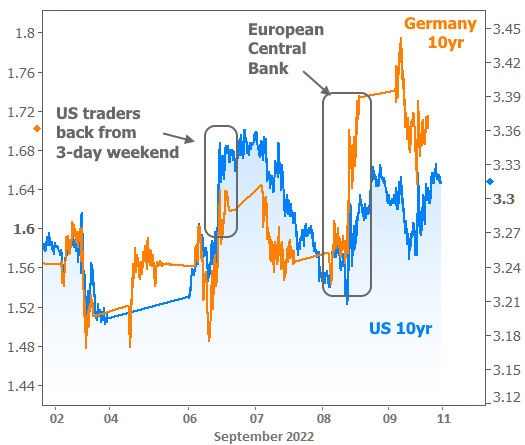 While US economic data is certainly responsible for a good amount of upward pressure in rates recently, Europe and European Central Bank policies have been adding fuel to the fire.  This can be seen in the faster rise in EU bond yields. Incidentally, the initial jump in the blue line (US 10yr) in early August coincided with several strong economic reports in the US: ISM PMIs and the Jobs Report. 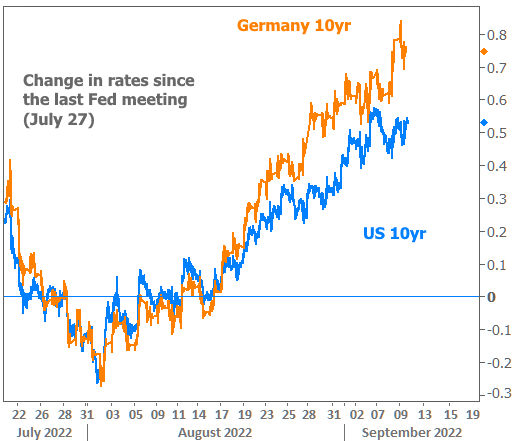 Long story short, rates have topped out twice and the market knows what it looks like to see high rates in conjunction with a strong economy.  The bigger question is the extent to which inflation is calming down.  After all, inflation is the reason the Fed continues to say it's willing to attempt to restrain economic activity via rate hikes.  Looking at the year-over-year chart, it looks like we have a long way to go for the Fed to get core inflation back down to its target. 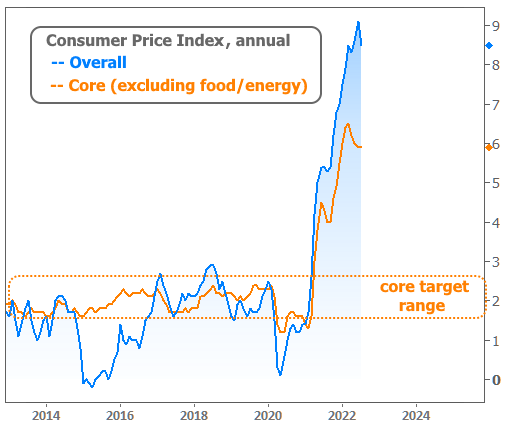 But year-over-year data is just that.  It includes the past 12 months--many of which contribute a massive amount to a total that will inevitably be much smaller even if the economy simply maintains the current monthly pace of inflation.  In fact, core inflation only needs to move down 0.1% in the next report to put year-over-year numbers on pace to hit the target range.  Once the Fed is reasonably sure that's happening, it can begin to consider a friendlier shift in the monetary policy that has recently put so much upward pressure on rates. 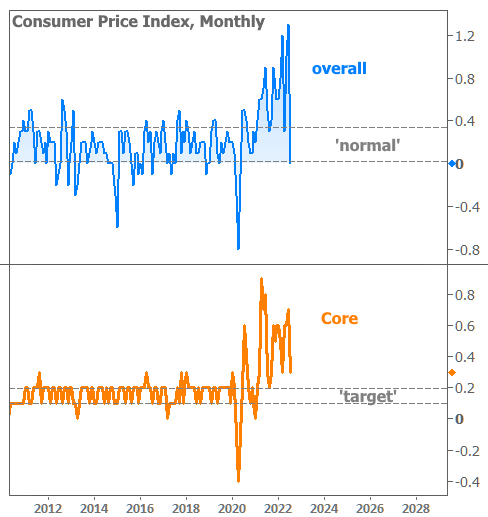 And that brings us to why things are about to get interesting.  Summer is unofficially over.  School is back in session.  Traders are back at their desks.  And next week brings the next installment of the CPI data.  6 short business days later, we'll get the next Fed policy announcement as well as an updated rate hike projection from each Fed member.

All of the above is made all the more interesting due to the fact that the Fed--by its own admission--has no idea how much it will hike rates in 2 weeks, and that it will only be able to decide after it sees economic data.  Given that CPI is by far and away the most relevant piece of economic data between now and then AND that the Fed has a policy of abstaining from public comment starting 11 days before a meeting (aka today was the last day of Fed comments until 9/21), the market's reaction to next Tuesday's CPI data could be tremendously interesting indeed.